Skip to content
Posted on November 10, 2016November 11, 2016 by msmalarkey Posted in Childhood, Growing UpTagged adulthood, being afraid, comedy, conquering fears, fear, growing up, humor, life lessons, this happened to me

If only writing about fear made you brave. Actually, if we’re wishing for stuff then I wish that eating junk food would make you thin.

Imagine how great that would be – oh, looks like you gained a few pounds. Better just stick to pizza and candy corn this week. Lay off that broccoli for a while.

Fear. Fear is…well, hm. This would be a good place for one of those unverified quotes floating around the internet:

The funny thing is, your fears always sound irrational to someone else. Which seems insane to you because, uh hello, they’re terrifying.

Who isn’t afraid of spiders?

Okay, so that one I might need to explain.

I was maybe 10 or 11 years old, flipping through the channels on tv. My mom was busy doing something in another room, so she had no idea that I ended up landing on the movie The Leprechaun. 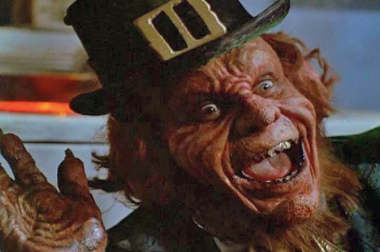 And when you’re younger and you realize that you’ve stumbled onto something you’re not supposed to see, you don’t act like a little snitch and run to Mom and Dad.

You keep your god damn mouth shut and soak up all the material unsuitable for a young audience. Fuck no I’m not seeking Parental Guidance.

So I sat there, mesmerized by the titillating world of low-budget horror. I was more than happy to continue to absorb everything I could when I caught my first glimpse of that little demonic munchkin.

Beyond the fact that his general look was absolutely horrifying to 10-year-old me, the worst part was watching what he was doing on screen.

Pogo-sticking a man TO DEATH.

How do we conquer the things we fear? By facing them? Who came up with that horse shit?

Honestly, I’m still not that comfortable with St. Patrick’s Day – even after dating my fair share of short, drunken Irish dudes.

A guy in my office dressed up as a leprechaun this Halloween and I wanted to throw him in front of a bus.

Side note: if you’re a short man, why would you dress up like a leprechaun? I’m a lonely single woman – you don’t see me dressing up like a Cathy comic and smuggling cats from sewers.

Some people think talking about your fears helps make them seem less intimidating.

These people haven’t had these conversations with my Mother.

See, my first mistake was admitting that I was afraid of something in front of her. Dumb. Sometimes I act like I don’t even know this woman.

Beyond the Lucky Charms mascot, I also have a fear of someone breaking into my apartment at night. I’ve rationalized that if I never sleep with my back to my bedroom door, the burglar/rapist can’t sneak up on me.

Mom: Okay, that’s ridiculous. If you’re so afraid, get another lock put on your door.

Me: What’s a lock going to do? A burglar/rapist can’t break through a lock?

Mom:  What do you think, this guy is so desperate to rape you that he’s bringing a chainsaw to bust through your front door?

Me: I don’t care for the implication that I’m not worth sawing a door in half to rape.

Not only was I fear-shamed that night, but I got a swift kick to the ol’ ego to boot.

Hopefully, you didn’t think I was going to come to some sort of resolution on fear. I have no answers. I’m a grown ass woman afraid of leprechauns and over-eager rapists.

The best solution I can come up with is over-thinking the chances of my fears actually coming true. So you know, being a woman.

What are the chances that the burglar/rapist is going to be:

in my State
in my City
in my neighborhood
at my apartment
on my floor
in front of my door
with a pogo stick?